I don't have to do everything for my child. 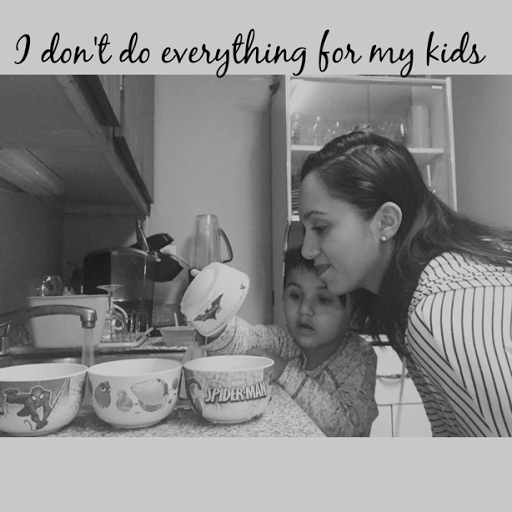 I was that mom. The mom that would undress her four year old for bath time. The mom that never let their child turn on the sink by themselves. The mom that cleared the table for everyone when dinner was over. I did it all, and gave them pretty much nothing to do but make a mess. I honestly just thought that was part of my job as their mother. I also thought they might be too little to understand the concept of picking up after themselves. Then after some time it just became part of my ordinary routine, that I did without even noticing. I became accustomed to rushing back and forth cleaning up after each child, and they just became more dependent on me - even when they knew they didn't necessarily need me for it. Like come on, his little legs can work just as good - or even better than my old worn out legs - so why am I running to get him a pencil for his homework? It was as if I robbed them of their independence. I was showing them that they didn't have to be self sufficient in any way, because momma was going to do it all for them. Without realizing it I was underestimating them.

Breaking that bad habit was tough on the both of us. It was so instilled into my oldest that we would come in from school, and he would just stand their with his coat still on, just waiting for me to come unzip it. When he and I both knew he was fully capable of doing it on his own. Getting him to do things on his own was like pushing him out of his comfort zone. He had that I cant do it mentality for quite some time because of all the years that I would rush to his every call and need, instead of letting him figure it out first. I realized this a whole lot more when my youngest was learning things a lot more faster than when my oldest was his age. I realized though that it was the lack of confidence I instilled in him from the beginning. I kept him from doing things on his own, not because I didn't believe in him, but because I felt it was what I had to do as his mother. But that only left him to assume that he was not capable of doing much alone. I started to give him more task that involved no help from me, to build up his confidence, and after some time he stopped being scared of doing things on his own. I had to constantly remind myself to not do certain things, but instead remind him, and reassure him that he was more than ready and competent to do so.

After some time of doing this it has become a full new routine for us, that my youngest has been inspired by early in age. I no longer take off their shoes or coats when we enter the home. I do not turn on the sink for them to wash their hands. I do not rush to the bathroom when I hear them go. I have also started giving them different chores to do around the house so they feel accomplished, and like they have a part in this home. I give them tasks that I know they are still not fully capable of doing just yet ; knowing that it will be more work for me at the end - but I know for them it will be a teachable moment. And the more they does it the easier it will get, and their confidence will rise. My oldest already knows that when he finishes his dinner he has to clean off his plate in the trash, and then "clean" his plate and utensils in the sink. Of course as any five year old he will barely clean his things. But I give him praise for trying, and then when he isn't looking I clean it once again. But if only you could see how his face lights up when he is able to do something all on his own! The "I cant do it" attitude is so far gone now, and every single thing they do they want to try doing it themselves first - before asking for help. It has definitely helped them become more free spirited, determined children.I have watched my five year old go from being scared of everything in sight, to a brave and gutsy child. My youngest had no other choice than to be a fearless dare devil as it was mostly all he was taught to be. Though he does take it to a whole other level. ( It's always the second child though, right! )

I no longer doubt their potential. I guess what I am trying to say is that sometimes when we think we are doing our child a favor ; we are actually holding them back from living up to their abilities.

Posted by MommyGorjess at Thursday, April 06, 2017