We Survived the School Year ! 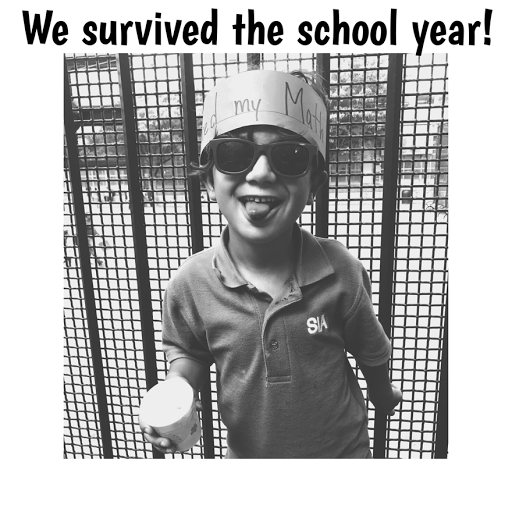 Both of my boys started school at two years old. So when my oldest started kindergarten and I joined the PTA I thought it would be easy peasy. I was wrong, very wrong. It wasn't that being class parent was hard ; but juggling it with work, homework and studying for exams, trying to remember every single meeting and school event - plus a million other things.... Let's just say I lived off tons of strong coffee and wine. But it's finally the end of the year .. and I did it ! I survived my first real school year!!!

I was nervous for him to start kindergarten. I was scared that he wasn't ready just yet. I can't help but still see him as my little baby ; my first born. But I had to put on my strong face and motivate him to expect nothing but greatness out of this big step. He put himself out there and made so many new friends ; while I did the same and made some pretty cool new mom friends ( if you are a mom you know this is harder than making friends in high school !) he put time and effort into homework and reading before video games ; while I put time into making fun new ways for him to learn his sight words ; instead of going to bed a bit earlier.

It was tough not just for him ; but for me as well. We both struggled with the changes but made it work and go it down packed ! The early mornings ; the separation anxiety ; the daily homework; the before exam nerves; the stage fright. It was tough at times; but I can honestly say this little one of mine is quite an over achiever like his momma. We strived for the best of the best even when we had little strength in us. We did it together!

I believe whole heartedly that this school year made us a lot closer. He put his trust in me more than usual to guide him and work with him to achieve his goals. We spent special mornings waking to school and reminding ourselves that as a team we can make anything happen. He saw how dedicated I was to his school year that it instilled in him dedication. I shared lots of special memories I had of when I was in elementary school to make him aware that I was once in his position too. I reminded him every day that he wasn't alone ; and he would remind me the same. We survived - hand in hand.

So if you're a momma who made it through the end of a long school year - celebrate your awesome child for their achievements-- but you must remember to celebrate yourself as well ! You were there being the best role model ; rooting them on ; and working just as hard as them to help them achieve it all!

Every year will hopefully get just a tad bit easier ; for the both of us. But either way we both know we are in it together !
Posted by MommyGorjess at Thursday, June 08, 2017