Making Marshmallow Treats for our WWE Funko Pops with BlipToys. 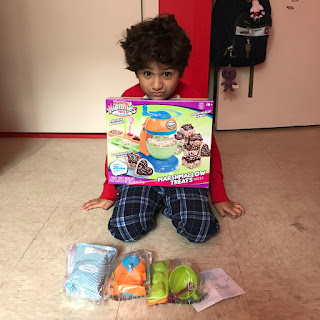 My kids watch YouTube every day. Seriously, every day. I know ... I am the mom you probably hate - like why am I allowing my children to be stuck on electronics. But guess what? It works for us, so I'm just rolling with it. They love watching videos of other kids opening up toys and reviewing them. They think it is the coolest thing ever. They have been begging me for their own YouTube channel and or to just be apart of my social media outlets, and I finally just gave into both. After attending Sweet Suite at Blogger Bash I got to meet so many awesome toy brands, and many of them generously wanted to send some of their toys for the boys to review. One company, in general, was Blip Toys. They sent us a couple of things, such as their infamous Yummy Nummies Marshmallow Treat Maker.

Now if you know Jace, and have seen his Cooking With Jace YouTube series you know that he absolutely loves baking and cooking. One of many things he wants to be when he grows up is a chef. I love that he enjoys it so much. I'm hoping it sticks and soon enough momma will get a little break when it comes to making dinner. 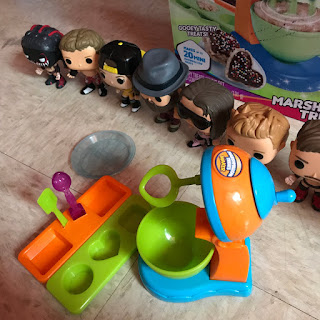 Of course, Caleb joined in because everything his big brother does he wants to be apart of! He had a cute idea that they would make believe they were bakers and they were making the treats for their WWE Funko Pops. They lined them up and started up the fun.

It was so easy, and fast that I barely had to help at all. They both worked together adding the packets together and mixing it all up with the mini mixer. They added the mixture into the mini molds that also come with it and then put it in the fridge for a couple minutes to hold together a bit. We honestly didn't even make the chocolate frosting because they are both the pickiest children in the world. They liked that they were able to do it all on their own, and unfortunately the WWE Funko Pop Superstars went hungry that day. 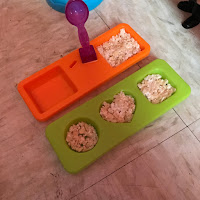 ( We were sent this toy by Blip Toys, but all opinions are of our own!)
Posted by MommyGorjess at Sunday, September 17, 2017