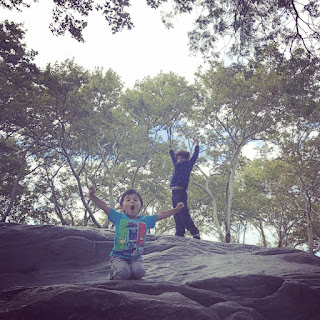 No matter how old you are, this world we live in is pretty scary. Growing up though I knew I was protected by my parents though so I didn't worry much about it. As a parent now I understand the struggles my parents had to go through to paint a pretty picture for me.  Now let me first say that this in no way means I am sugar coating things to my children, I am just aware of when it is the best time to explain certain tough topics with them. But I find myself having to push my fears to the side, and throw on my strong mom face for them. The first day of school is always a day I put on my strong mom face, and really rock it - until they can no longer see me and tears start streaming down my cheek! Let's face it sometimes its harder on us then them.

Back in July, we were going on an airplane for the first time as a family. This was the boys first time ever going on an airplane, and my first time since becoming a mother. They were pretty nervous about the experience, as any normal child would be I'm sure, but what they didn't know was that I was too! Not only was I nervous for them, but I was nervous myself as I have had horrible experiences in the past when it has come to flying on a plane. Back in 2008, I took a trip to Colombia all by myself to see my grandmother and her side of the family. We were flying right over the Hudson River, not far from the airport, and they prepared us to put on our life vest and stated that something was wrong with one of the plane's engines. It was terrifying, and something I don't think I will ever seem to forget. I remember trying to stay as calm as possible, and the person next to me took my hand and told me that I would be okay. I started crying hysterically as they said they were turning around and trying their best to head back to the airport before the engine completely dies out. It was the longest ten minutes of my life. What was ten minutes felt more like one hour. We did get to the airport safe and sound and were put in a hotel nearby to board our flight the next day. It was the hardest flight to get on, but I knew I had to do it or else I would just be scared of flying for the rest of my life. Though it has been 9 years since the incident, every time I would go on a plane it was my first thought.

So now back to our trip this summer, you can only imagine how tense I was, and how badly my nerves were going on an airplane with the two little human beings that mean the most to me. I told them nothing about my experience, and I didn't bring up anything about being nervous, I did quite the opposite because I knew I had to be their rock. I am the one that has to make them feel confident when they cant feel it right away. So I put on my strong mom face and I told them nothing bad would happen, and that airplanes are safe. I told them it would be fast, and we could have lots of fun on the ride so they don't have to even remember they are on a plane. That just what we did too! I was strong for them even when in reality I didn't feel too strong, or confident myself.

I am a huge believer that if you show a child your fears, they seem to usually feel like it has to be their fear as well. So I try my best to show the positive in everything even if I am terrified of it. The biggest influence on a child's fear is their parents fear. We are their influencers so we should always show them that we got their back, and nothing at all could harm them while we are around. I know that's exactly how my parents made me feel. So we are currently going through a fear of dogs in our home since we don't typically go around many dogs - and I am actually allergic to most. As a child, I was scared of dogs myself because I saw something that made me believe every dog was dangerous. I am not sure where the fear of dogs happened with my children - because I never told them the story about it, but its there and I am trying my best to break this fear. I remember the day I found out I was no longer scared of dogs was actually the same day I found out I was allergic. Ironic huh? I don't want them to fear anything I do not believe is threatening them so I will be doing the same thing my dad did for me to break my fear of dogs. I won't share too much about that now, but be on the lookout for a completely different post on it in the near future.

I want to always be my child's confidante, their balance, their salvage. So with my strong mom face we will face, all of our fears together.


Posted by MommyGorjess at Thursday, September 28, 2017