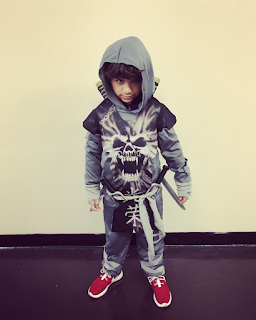 Halloween is officially over, and though I love Christmas I can't bear to get rid of all my fun and spooky Halloween decor just yet. I made sure that the house would have Halloween decor for a little over a month. I know we started early, but the boys love it so it was a must. My youngest was a ninja and my oldest chose to be a zombie ninja, because he's at the age where Halloween means you gotta be scary looking.

As class parent I had the chance to plan the Halloween class party this year, with help from other parents too! It turned out great and they all had so much fun. We had an hour to enjoy, so I planned out two games that wouldn't take too long but get them in a silly mood. We played Mummy Wrap, were they were put in groups of 4 and had to wrap one child up in toilet paper from head to toe in a team effort. They loved it and got a kick out of doing it to their teachers as well. The second game we played was a Spider race. With a double sided race track I made out of poster board they used plastic spiders to flick from start to finish! 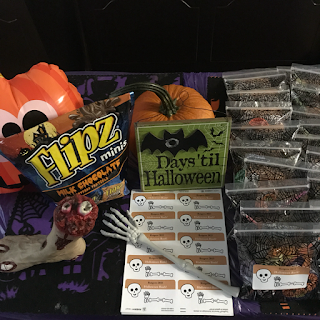 I wanted to make the goody bags simple and candy less! Since I was very sure they would rack up on candy after school anyway. With the help of Michaels and Target we were able to give Halloween themed note pads, tattoos, stamps, pencils, and glow sticks ! I also added some Play doh for fun molding, and for a sweet treat Flipz chocolate covered pretzels was the perfect choice. The awesome skeleton labels were made with Avery and has a personal touch with their class name on them. 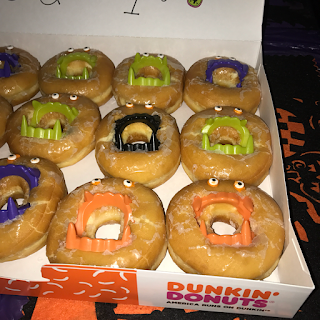 As for snacks I got a bit creative with Dunkin Donuts glazed donuts and turned them into scary vampires with plastic fangs the kids could wear after they finished. The monster juice was a big hit, we used Bolthouse Farms Green Goodness and mixed some white grape juice into it to thin it down a bit. They had no idea they were actually drinking in some veggies! We had so many other treats as well lined up on the table! All the kids were happy, the parents were happy, and the teachers were too! I believe Party planning is something I am good at because I really enjoy it, and I think about everyone that is important during it. I love that his school allows me to be so involved because it helps me bond with all the important people on his life that he finds comfort in daily. Plus I'm a person that just can't stay still for long and fun projects like this keep me busy and inspired. Cheers to my first class parent party & soon we will be on to the next one !
Posted by MommyGorjess at Thursday, November 02, 2017