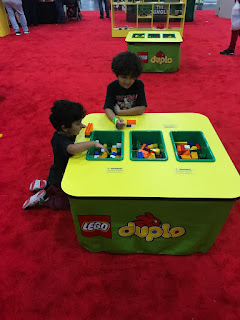 When I think of Christmas I automatically think about toys. Because honestly, it is the only real thing my kids want to add to their list. I remember as a child being so disappointed when opening up presents of clothing when now let's face it, it's all I want.  But children cant get enough of toys, and lucky for us mommas there is a new toy being made every minute. From big ones to little ones, to educational or tech-savvy. When we were invited to attend Play Fair we knew we would need all three days to soak it all in. Yup,  I said three days. I know we are pretty insane, but all in all, it wasn't much of a headache and the boys had the most amazing time ever. They met all their favorite cartoon characters, and got many hugs from them all!

We were invited to attend Media Night first on Friday Night to get a first look at what we could expect at Play Fair, then we also attended on Saturday afternoon, and Sunday for the last day. There was honestly so much to do, so much to see. We did all three days because we live walking distance from Javits Center, and also because they wanted to experience every single part of the fair. On here I will just narrow it down to a couple of our favorites! 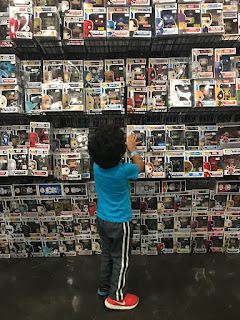 The first thing that caught the boys eyes when we got there was the lifesize Paw Patrol Lookout Tower. They spent some time there with the SpinMaster crew and got to go down just like the pups do before their missions begin. We also looked around at the Midtown Comics section, where the boys glanced through all the cool Funko Pops wall. The Playdoh kitchen creation station was a big hit with my little one, as he is huge on playdoh. Trust me it is all over our home, and I can't count how many times he has made "food" for me with jars of it. Super Mopi was a big hit, for both of the boys actually, even though my oldest was way too big for them he found a way to enjoy the ride. They loved it so much it was honestly one of the few that they went to all three days! 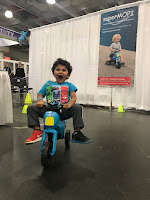 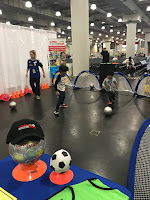 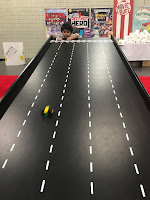 The lego station was amazing, and so spacious for so many children to create. They had this really cool racetrack where you got to race down your lego created cars. The boys really enjoyed making them and then using them to race them down, and then do it all over again. My little one liked it so much that he was hoping he could buy the racetrack they had there for it, so I had to improvise and make him one out of paper once we got home. Super Soccer Stars were there and my oldest was so ready to show off his soccer skills. He has been a really big fan of soccer since daycare, so he got all in the mix and started scoring some goals left and right. The teachers that were there were so patient and fun. He had a good time learning new things he didn't know he could even do with a soccer ball. My youngest was very proud of himself each time he scored a goal just like his big brother! 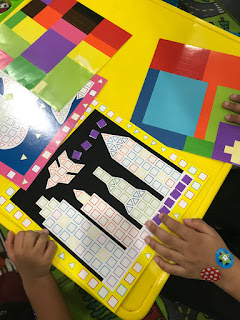 There was an ALEX Brand Art Station that the boys both really loved. They were so excited to find out that the very own Crafty Carol from Cool School on Youtube was going to be there, and she was going to do a craft with them all. They were all smiles while talking to her and telling her how much they love watching her videos and creating all the fun crafts she teaches.  On the last day, we did the things I knew the boys were looking forward to the most. So we hit up the Ben 10 station which you got to spin a really huge wheel that would land on a Ben 10 character and a surprise gift would come out for you. They loved that they got to go on a stage together and speak into a mic. It honestly gave me wheel of fortune vibes. They won some really cool Ben 10 masks that they play with just about every day since. 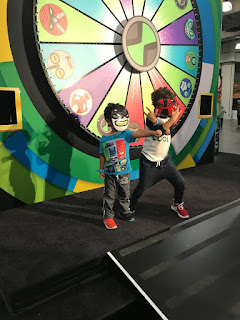 Saved the BEST for last. If anyone follows me or knows the boys they know that WWE is their life. It is honestly something they have enjoyed since they were able to walk and talk. It has been part of our lifestyle, and it's honestly such an important part of our family. They can name all the superstars, even the wrestlers way before their time. I don't believe any other 3 and 6 years old knows as much as they do about the WWE. So when I found out that Daniel Bryan and The Big Show were going to not only have a Q&A session, but they were going to do a meet and greet with autograph signing, I knew they were going to feel like the luckiest kids in the whole entire world.  We sat front row for the Q&A session and the boys loved hearing all they had to say. They told us how wrestling became their career, and how their love for it began. They told us about their all-time favorite superstars that they enjoyed watching when they were younger. It was a great session because I feel like we got to see a different side of them that isn't shown during their wrestling shows. They asked them a pretty cool question if they could have any super power what power would they choose. They both answered HEALING. To end poverty, to end violence, to end hunger. To heal all who are hurt or broken. It was just amazing to hear them say that because both of my boys really look up to them, and they explained how flying or invisibility could be fun, but there is nothing better than to be a real change in your community, in others lives. That is something to definitely look up to. 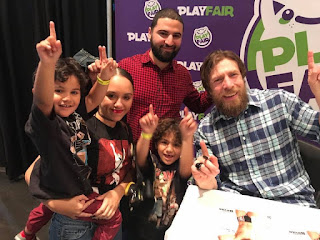 After the Q&A we went over to the lines to meet them and take photos with each of them. They gave high fives, they asked them their names, and they even got to do the YES! with Daniel. Let's just say they were in heaven.  It was awesome being able to check off something on their top five list of things they would want to do. It was also the most perfect way to end our Play Fair experience. I believe Play Fair is such a perfect event for kids of all ages. You were able to find things for kids ages 1 to about 15 years old. It had everything from toys to books, comics, to classes, to hands-on experiences. My boys were far from bored during our three-day experience, and they still anticipated to go back for more. We had such a fun and eventful time, and they are already counting down the days until next years which I am sure will be even bigger and even better. 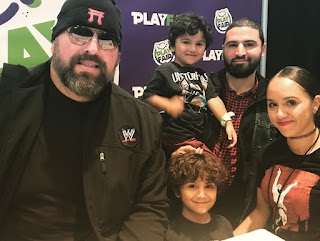 We were hosted by Play Fair to attend this event, but all opinions are honest and our own!

Posted by MommyGorjess at Wednesday, November 15, 2017