They followed The Star. 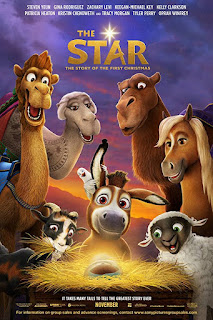 Earlier this week the boys and I were invited by Sony Pictures to go and see an early screening of the movie The Star. I remember seeing the previews a while back and saying it was a must watch for us this coming holiday season. I was very happy to finally see a movie about the true meaning of Christmas. Not to say I don't like any of the classic Christmas movies, or the whole idea of Santa because I do. I enjoy everything there is to Christmas that makes it a magical time for everyone, but I do love things that shed light on the real reason why we celebrate it. I also try my best to teach my children all about Jesus, and why I believe in him. So this movie was great because it was a fun and bright way to teach them something I have somehow struggled to teach them myself in a way that they will enjoy it. With some great cast members such as Steven Yeun, Gina Rodriguez, Zachary Levi, Keegan-Michael Key, Kelly Clarkson, Patricia Heaton, Kristin Chenoweth, Tracy Morgan, Tyler Perry, and Oprah Winfrey.

I believe it was a great mix of truth, and entertainment enough to keep small children interested but still show real facts about the "First Christmas Ever". My youngest loved the donkey named Bo. He was a mill donkey who wanted to do more with his life and when he saw a new star appear in the sky he felt it was a sign of something good to come. He knew he had to go for his dreams and leave the life he has always had to find out what this star meant. It was a sweet story that anyone can really relate to, where you feel a bit lost or not content with life and know you have a bigger purpose. He also said one of his favorite characters was Mary because she was loving and compassionate. She found Bo and right away took him as her own. She gave him a name and a home and made sure he felt part of her little family. She was also a resilient woman with so much faith, that she knew she was being used for a greater purpose. I loved the way that they defined her and Joseph's marriage. They showed it as something that was not perfect but at the same time supportive and admiring.

My oldest loved hearing all the comedy from Dan the Dove. He was Bo's best friend that followed him along his journey with Mary and Joseph from Nazareth to Bethlehem. He helped them during all the tough situations that kept getting in the way of them keeping Mary safe from the ones who did not like the idea of a new King to be born. Despite every bad situation, they found a way to work together to not allow anything to harm Mary or her baby without even knowing exactly why Mary was in danger. Without even knowing that they were soon going to witness the birth of the Messiah.

I don't want to give too much away, but its quite obvious that at the end Baby Jesus is born where he was meant to be born, in a small manger over a bright and beautiful star. It was obvious to everyone that something special and out of the ordinary was occurring right in front of their eyes. It was such a beautiful scene that honestly almost made me tear up. It was such a perfect ending where you just feel that something amazing just happened, and there is so much more to come. I am honestly hoping that there is more to come, like a sequel that shows more biblical stories of Jesus and all the great things he did during his time so that children can learn more about these stories in a fun way. My boys loved the movie and laughed through the whole thing. It completely warmed my heart when we knew Jesus was soon going to be born and they were both so excitingly saying " Baby Jesus is coming, He is coming!" and then there faces when they showed Baby Jesus their eyes were filled with pure joy. They both looked at me after the end of the movie and said: " Jesus being born was my favorite part of the movie". It was a part they were anticipating to see the whole time, and finally, when it happened they most definitely felt the greatness of it.  I am pretty sure we will be going again really soon to rewatch it. 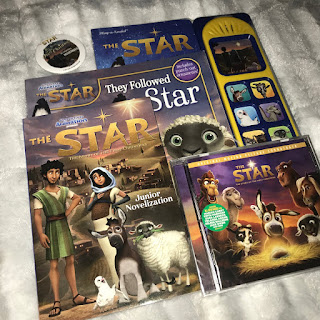 We got some really awesome goodies that were given to us by Sony to celebrate this movie release and one of my lucky followers will be winning this prize package. All you have to do to sign up for this giveaway is to subscribe through email on the right hand side, and then comment DONE under this blog post, and don't forget to go check out this movie in theatres now, with your family to celebrate the true meaning of Christmas.
Posted by MommyGorjess at Sunday, November 19, 2017