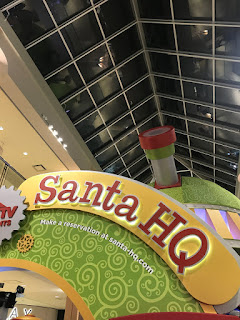 Before I became an NYC mom, I was a single childless Queens girl. With that being said the holidays were a very exciting time while living out there for me, but in a different way than it is now. The city is beautiful during this time of year, all the lights, the Rockefeller tree, and all the holiday window displays. There is no doubt about it that NYC is a must during the holidays, but Queens has something different, yet special to get people into the holiday cheer. From the cool and very grand house lawn displays (If you have never gone to see the Lynch house you should add it to your bucket list - as a child it has always been one of my most favorite holiday memories), the huge selection of tree farms, and now Santa HQ at Queens Center Mall.

We were hosted by Queens Center Mall and HGTV to go and check out the Santa headquarters before it became open to the public the next day. The boys actually have never gone to see Santa before, so they were very excited. They were far from scared, and so ready to meet him and sit on his lap. When we first got there it was time to get scanned at the Naughty or Nice O'Meter and find out if you were making the naughty or the nice list. They stood on the footprints while it scanned their body and read their behavior. It then showed their name on the list they made it onto. My youngest let me know he was not going to tell Santa that he has been naughty. Luckily Santa let him slide this time and put him on the nice list! My oldest was standing there hoping for the same luck, and well enough his name landed on the nice list. Let's just hope the elves don't realize their machine could possibly have a glitch! 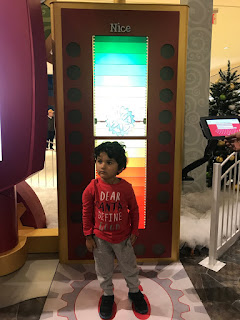 After the behavior scan, we got to take a prop photo in front of the Santa HQ backdrop, which was a perfect way to save the memory of our experience. We then got to go inside what looked like Santas living room. It had a couch, with a TV and some cookies, but the fun part was the tablets that were connected over the TV which allowed you to take elf selfies of your face and create a very funny personalized dancing elf video where our faces were put onto the elves bodies. It was super silly, and the boys loved watching it over and over again.

The next room was called the control room. A bunch of different buttons, and switches that controlled many different things like the sleigh and other things. Lucky for us it doesn't really control everything because the way my little ones were pushing and turning knobs wouldn't have been a good outcome! 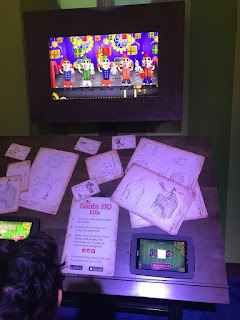 Lastly, the grand finale was getting to meet the big guy!He took the time to ask the boys their names, their ages, and what they were looking forward to receiving on Christmas Day. We took many photos and then he left them with a little piece of advice so they can stay on the nice list: Eat your veggies, and always listen to mommy and daddy. I am hoping they haven't already forgotten Santa's wise words.


There are so many more awesome things about Santa HQ like...... no lines! You can easily just make a reservation to see Santa now on your phone or computer before you even get there. Then they outdid themselves with a little something called Elf Ray Vision. Let's just say its an inside look at the busy elves that help make Christmas so magical. So much to see and so much to do. It is a Santa visit experience like no other. I would really recommend it especially for children who have never done so and it will be their first visit. It isn't rushed or intimidating at all. Plus the elves were the funniest and most entertaining, they had the boys laughing every minute. 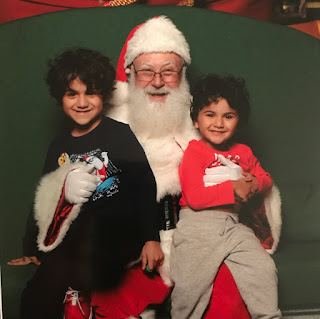 Most importantly the photos came out perfect, and they will soon be hanging on my wall to show off to everyone during all the holiday festivities we will be hosting. Thank you, Queens Center Mall!  We will be returning on December 2nd for a breakfast with Santa at the food court. Also, they will be having a Help Through Holiday Giving Toy Drive from November 18th to December 10th, bring an unwrapped toy for underprivileged children who deserve a little Christmas cheer.

CLICK HERE TO MAKE YOUR RESERVATION TO VISIT SANTA!
Posted by MommyGorjess at Sunday, November 12, 2017