Get into the Spider-Verse NOW ! 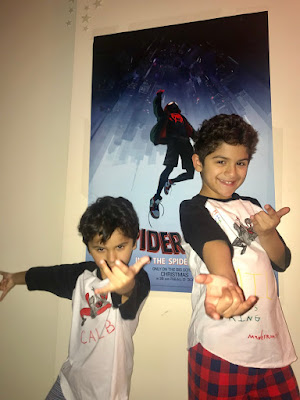 Spider-Man: Into The Spider Verse movie was one of my favorite movies thus far this year. I loved the soundtrack, the action, and the NYC vibe it gave off the whole time. I loved that it had me feel all kinds of feels too! One minute I was laughing, the next minute I was on the edge of my seat.

One of my favorite things about watching movies with the boys is looking at their reactions when certain things in the movie happen, and hearing them laugh so hard. Which is exactly what happened with this movie. There were many whoa moments, and so much laughter! I am so excited to say that it is now out on Blu Ray and DVD for you and your family to own and watch over and over again.

In celebration of the movie coming out on DVD our friends at Sony Pictures sent us a super fun shirt coloring activity where my boys had such a fun time creating their very own custom Miles Morales shirts. They made them and instantly wanted to wear them. They even decided it would be a good idea to wear them to school the next day. My big guy wears uniform, but that didn’t stop him and he wore it as his undershirt. They spent so much time looking at the figurine to get every last detail.

Lucky for you, we have a DVD, an extra shirt and fabric markers with your name on it. Plus some extra surprises! All you have to do is share or comment this post to have a shot! 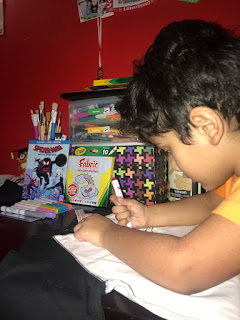 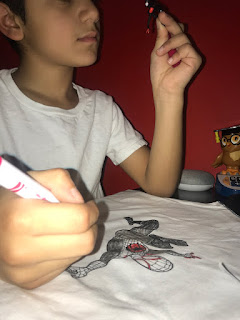 SPIDER-MAN: INTO THE SPIDER-VERSE is directed by Bob Persichetti (The Little Prince), Peter Ramsey (Rise of the Guardians) and Rodney Rothman (22 Jump Street), and screenplay by Phil Lord and Rodney Rothman from a story by Lord. The film is produced by Avi Arad, Amy Pascal, Phil Lord, Chistopher Miller, and Chrstina Steinberg. The executive producers are the late Stan Lee, Brian Michael Bendis, and Will Allegra. 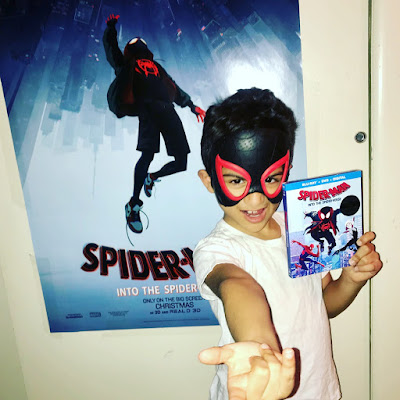 SPIDER-MAN: INTO THE SPIDER-VERSE has a run time of approximately 117 minutes and is rated PG for frenetic sequences of animated action violence, thematic elements, and mild language.