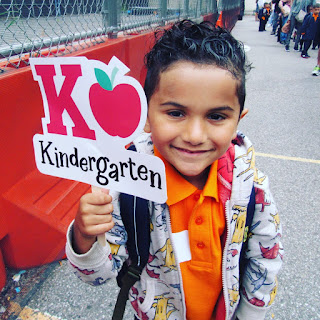 Bare with me, but this is a post I had in my drafts and completely forgot I had written it - but when I read it I felt the need for it to be posted because its just a raw piece of reflection that I feel would make a difference for someone out there going through the same feelings I was at the time!


As I sit here I am reflecting on my week. It was a bad week, like really. I can't even sugarcoat it because it was so downhill guys. This week Caleb started Kindergarten, and Jace started 3rd grade, and lets just say I felt like the worst mom in the whole entire world. Sounds dramatic right? But I seriously felt like my world was crashing down, and I couldn't stop it.

I wasn't worried about the first day of school. I was actually excited about it, because my little one didn't show any signs of being nervous, or scared. He seemed ready, and I felt great about him having his big brother to walk in with and I thought it would be easy peasy lemon squeezy. I swore I had it in the bag, like I was too confident. And maybe that's why it hit me harder than I could have ever imagined.

The first day was great, they were pumped, they made it in and they had a great day. But then the second day rolled around and I guess thats when it hit him that Kindergarten was actually more than just one day of your life, but more like your whole life, every single day. The complaining started, and the morning meltdowns hit hard where he kept saying "I don't want to go to school, I hate school" I just brushed it off and kept a calm and positive vibe, and got them to school and he cried a bit but nothing extreme. The third day rolled around it was even worse, now there was more tears, more yelling. Still I pushed through.... in my head though I was feeling crappy. I felt defeated. The fourth day was my breaking point. He cried from the instant he woke up, all the way into school - full on sobbing to the point where his big brother even felt so bad that he started crying, and thats when I noticed it was affecting both of them, and that made me feel even worser than before. I felt like I was straight up failing at motherhood. I just left both of my kids at school feel miserable and crying. So this momma cried her whole way into work, and as soon as I got into work I locked myself in the bathroom, turned on the faucet, and cried even more until I had no more tears left. My eyes were burning, red, and swollen and I felt very unlike myself. I felt worthless, I felt like my kids hated me, and I felt like I had completely let them down. What was I doing wrong? What can I do differently? Will this ever end? You would think as a mother of two, things like this would get easier with time ....but it surely doesn't. Your baby will always be your baby, and when they hurt, you hurt 1,00000 times more. I told myself they would be fine, they will get over it, they are okay, but I still felt like I wasn't good enough. Mom guilt hit me so hard, and this was the first time it ever hit me THIS hard, and I am not sure why exactly but it was a feeling I had never felt this intense. I truly disliked myself this week, and felt like I wasn't fit to be their mother, even though the instant I would see them they would tell me they had a good day, and we would play and cuddle and fall asleep together.

Now that the week is over, and all the meltdowns are over I am picking up all the shattered pieces and putting them back together. I am feeling more like myself and blessed to have gotten through it. God granted me a great Friday, maybe because they knew they have a four day weekend but I wont complain. It was finally a good morning where I didn't have to have a mental breakdown in my work bathroom or on the MTA subway. They walked in this morning with smiling and brave faces, and I was able to sip my coffee peacefully to work feeling like a good mom.  Does that mean it is completely over? I wish, but I know its just the beginning. But maybe, just maybe I had to go through this situation, these feelings, this guilt, so that I could come back stronger to get me through this whole school year. It sounds horrible but everything always happens to teach you something, to help you grow for something harder, and make you tougher to fight back. I did learn a lot from it, but I also realized how blessed I am to have so many people around me that are lifting me up at my lowest points, and it showed me that I am a great mom, because I care, and maybe I care too much - but my babies mean more to me than anything else in this world so my heart will forever hurt when it has to do with them.

I wanted to share this because I know I am not the only momma going through these kinds of emotions with a new school year starting, and I want you guys to never feel alone in these feelings. We are all going through the same situations, but without talking about them we will never know and feel lonely in our thoughts. We will all be okay if we just open up about it, and speak to each other. We are not alone ever in this hood called Motherhood!